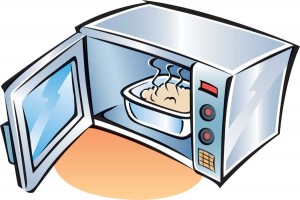 The Secret, also known as the laws of attraction, simply put is this.. think of what you want, why you want it, then believe you can have it.  Then it will come to you.  I know.. for the skeptic’s out there.. it sounds like pipe dreams, malarkey, make-believe and BS.

It’s none of those. Now that I understand how the secret works, I realize that I’ve been actually using it for a long time.You have people who will say getting what you ask for is purely coincidental. Let me tell you quite bluntly, those are the words of someone who’s never learned to use the secret well. The are millions of people using the secret every day! You too can be using the secret to get what you want.

I remember one day in the early 2000’s, I standing in the doorway of the office for the Internet Provider where I worked.  Standing beside me was my co-worker Alex.. I said out loud I really need to get a microwave for the two bedroom apartment we shared.

Our office’s front door faced the back alley of the main street of Midland Ontario.  No sooner than I had said those words, and out of the back door of a restaurant came an employee with a microwave in his arms. He put it down at the curb and stood there lighting a cigarette. I walked over to him and asked if they were throwing out the microwave. He said they were. I asked what was wrong with it, he said just that the handle on the door had broken off and I could have it if I wanted.

I picked up the microwave and took it back to the office. I used that microwave for the next four years. It cost me nothing, all I had to do was ask for it.

I will admit that I had to use a butter knife to pry open the door when I wanted it open, and that the microwave wasn’t perfect or brand-new. But then again I didn’t specify a brand-new perfect microwave, I simply thought about and asked for a working microwave and I got one.

Now years later I know it’s an example of using the secret. Asking the universe for something, waiting and getting it. It’s that simple! Sometime it’s right away sometimes it takes a little while, but it’s always delivered.

You just need to practice patience and trust.  Trust the item will come to you and patience as it could take second or longer.  And this is just one of thousands of examples in my life. If you practice you to can be using the secret to get what you want!

Except where otherwise noted, Using The Secret.com by Mark Ian Seifert is licensed under a Creative Commons Attribution-NonCommercial-NoDerivatives 4.0 International License.
We use cookies to ensure that we give you the best experience on our website. If you continue to use this site we will assume that you are happy with it.Ok